Well we has been workin again, submittions are almost all in and the new map is sort of complete, the one for the hill that is.

On those lines we have to thank the "Parrot" for his work in producing the long lasting and most useable map of the hill to date, I could not better it but settled for getting it GPS accurate.

Advertising is nowhere near full but thats no prob, we go ahead regardless this time, spare space will be filled with something.

Anyway, have a look at the latest effort, a proof as ever. 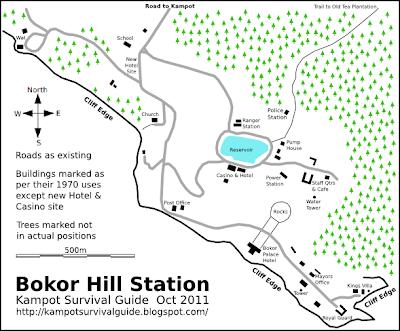 Julia lives and works in Phnom Penh and has trouble thinking of anything nice to say about anyone, so this is actually quite a stellar review.


Admittedly, the place is a bit backwards, you might say. If you tell English speakers that you went there, and recommend it, they will not have an easy time finding it (even though it's quite easy to find), because there is no such place in Kampot as what they assume that you meant. In English, the adjective should go before the noun. In Khmer, the nouns generally go before the adjectives, but that's when you are using Khmer nouns and adjectives. If you are going to name your bar in English, then maybe you should follow the English conventions, eh? But no. It's called BAR RED, not RED BAR, and until you wrap your head around that, you will never even have a chance to get properly thwarted.
In general, before you recommend a room, you should probably be allowed to stay in it, right? Screw it. I'm recommending the rooms anyway. Maybe next time, I will be allowed to stay in one of the rooms! At least I got to actually look at one this last time. The food on the menu should be available on roughly the same day as the menu is posted, right? Whatever. The menu is mouthwatering. Wait until you actually get to TRY the food! That should be good enough, you whinging tourist. What, are you in some kind of HURRY? Instant gratification is emphatically not what Cambodia is about. This is the Kingdom of Wonder. If you should be so lucky as to get close enough to see the menu at BAR RED, you will also notice (or not) that the clock on the wall keeps perfect time… exactly backwards. Maybe you're early. Maybe you're too late. Best just relax and congratulate everyone and buy a round. This will help, guaranteed.
By the way, if you are a backpacker, you might as well forget about BAR RED because they have a sign with a picture of a backpacker and a big X through it, saying "NO BACKPACKERS" on it. However, you have to be already sitting at the bar, if it happens to be open, before you can actually see the sign and slink out. In my experience they are not that fussy about the backpacks themselves, and if you are already drinking (especially if you have bought a round and claim to have only a fifty dollar bill on your person) they probably will not throw you out until your tab reaches at least thirty bucks. But they might. I don't know about that for sure. If the space between the letters disappears, then you are BARRED and should go to your room (if they have let you have one).
Another nice thing about BAR RED, should you be able to actually get in and stay long enough to feel nature's call, is that BAR RED will disabuse you of your bourgeois assumption that you need toilet paper for anything. There is nothing wrong with the toilet (although for some reason one of the resident cats won't use it and prefers the floor in the corner beside the sink), but I'm afraid I used up the last six squares of the toilet paper on the first night of my last visit to BAR RED, and although I mentioned it, no moves had been made three days later to replace the roll. So what? Who needs toilet paper? The bum gun works fine and it's easier on the trees.
So anyway, it is not necessarily true that you can't get served, eat or sleep at BAR RED, but then again it's not necessarily true that you CAN get served, eat or sleep there, either (at least, on purpose). If you have seen any of the ads for BAR RED, you will have noted that it advertises itself as a bar and restaurant with good music and guest rooms. You probably didn't take special notice of the fact that it does not advertise itself as being, say, OPEN. So what? What is your problem, you whinging tourist? The rooms are fine, they have cable TV, and they are clean. The food is absolutely fantastic. Hey. Good food takes time to prepare. The music is great. The company is unfailingly amusing and the staff is charming and helpful. You came all the way to Kampot just to complain about the fact that you can't HAVE any of those things right away? So take a pill. BAR RED does things the Cambodian way. It puts its adjectives after its nouns. Personally, a lot like Bar Red I.

Many thanks Julia, sorry I can't squeeze it in the guide but I am sure it will be seen here.  Keep up the good work n visit again soon.