French mark up credible time in Bar-Red's yard of ale challenge, only 60s for the whole 91.44% of a metre. 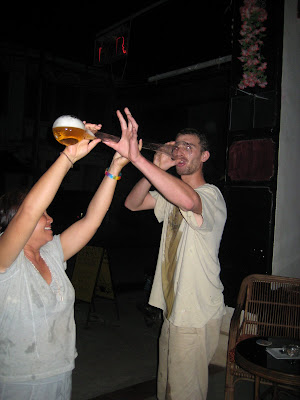 River to be drained for cleaning.

Crocodile reports in river increase, probably due to false sightings confused with the monster.

The end is nigh...
Posted by Steve j No comments:

As predicted by the Chinese horror-scope the KSG mainframe melted down last week, thus delaying the production of issue 15.

Donations for the repair / replacement of said mainframe are most welcome and well needed, please send cheques / postal orders to the KSG offices marked CASH.

Many thanks in anticipation.
Posted by Steve j No comments:

We have another 1000 copies to distribute this or should I say later this month, 300+ have been shifted so far with the rest due out over the following weeks.

Issue 15 has been started in both Scribus stable and NG, I think we will be staying with the stable version though. Well I am having trouble with NG, I cant get the spell checker to check more than a few words at a time, which in theory is better than the stable version but when it only finds "bokor" and "(the" its pretty useless to me, also NG is bombing out on .pdf creation so its no use to me yet, though I will keep plugging away at it till we do indeed have a working spell checker.

Issue 15 may well run for 2 months, or maybe even 3. As soon as a decision is taken I will let you all know.

Bar-Red party a success, many customers were watered and fed in appreciation of their custom over the past year.

Backpackers call for swimming pools with their dorm rooms.

Limp Dick returns to Snook after re-build.
Posted by Steve j No comments: