The Rose of Bokor - Re-visited

This post is about what I call the "Slate Floor" house on Bokor, and as you must have guessed it was used in the film "The Rose of Bokor".  A film made by HM King-Father Norodom Sihanouk of Cambodia back in 1969.  The film starred both Sihanouk and his wife and is set in 1945 when for a short time, Cambodia managed to free its self from the French and became a republic.

This shot is from the film, I know it's not very high quality but it shows you that the house was made to look like, a "log cabin".  All you can see of the log cladding now is the nails that once fixed it in place. Inside was also all wood paneled, there are shots of it in the film and it looked good, a little like the interior of Canadia bank or the foyer of the Borey Bokor Hotel. 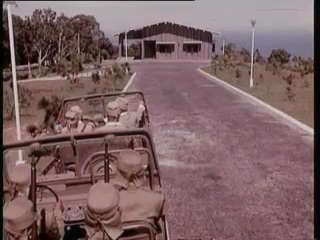 This is what it looks like today, not quite as pretty but it still has charm.  Notice the wooden batons running horisontally where the vertical log cladding was nailed on. 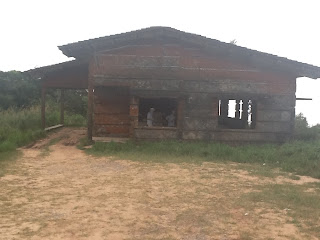 This is the view from the other side of the house.  Notice the remains of the slate flooring that must have cost a bomb, again you can see the batoning both inside and out. 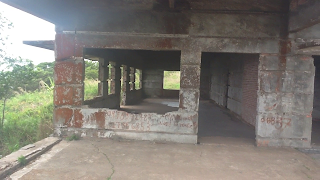 This is a series of clips from the film that shows both these views, albeit from different angles.

This is a snippet of my video from the back of the house, the opposite camera angle from that in the film.  Notice the nails still standing proud in those batons.

If you are interested in the film you can view it on HM King-Father Norodom Sihanouk's own website.


Issue 24 is almost ready but will not be available for proof reading, because...  we want the errors left in!  There is a reason for this, it's cos this is the 101 error issue, if you manage to find all the errors you will be entitled to a prize of some sort. 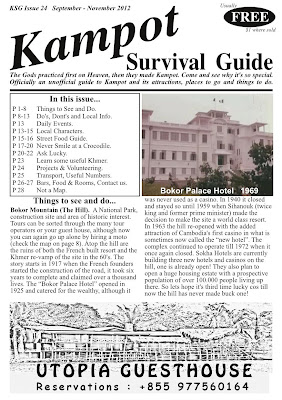 So here we go again, this time we have to thank...

We are just waiting for the last couple of bits of artwork to come in, then it's off to print again, copies available from Sept first.
Posted by Steve j 1 comment: